FOUR NEW RELEASES – I Should’ve Torn Out Your Eyes/TGG, The Golden Gonk, MMIV + Other News

Posted on December 29, 2014 by thegoldengonk

To order direct, please contact me at the following address with details of the titles you would like to purchase: 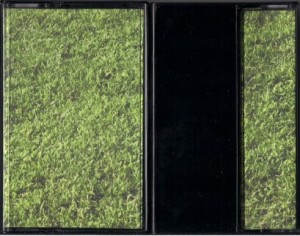 I Should’ve Torn Out Your Eyes:

It’s here- finally!! I don’t know what took it so long…well I do actually…and no- I don’t want to talk about it…but anyway- it’s out now and that’s the main thing…I Should’ve Torn Out Your Eyes- great name!! They used to practise in the allotments outside my house…I bootlegged them a bunch of times- hid in the bushes while they riffed away cultically for the slugs…the end results are buried in Goosnargh…but enough of “then”- some summer or other I invited them into Shack HQ to cut a version of their titular jam so fucking long it’s still going on now (which can ONLY be drowned out by remastered Van der Graaf Generator CDs)…this C30-friendly snippet of that exact mashed monster musical marathon should give you an idea of what they’re all about (and perhaps why they wished they’d plucked out yer peepers)…as for my side- well, I’ve always found August to be the most ponderable of months…signs and sigils, sightings and subtexts…whether trudging nowhere through deep grey Lake District piss or levitating in a quasi-psychotropic haze in a park in West Yorkshire, August happenings are totally worth sticking under the microscope and DRONING about ENDLESSLY, especially when no one is listening…

Pea green C30 cassette in a clear front/black back case with full colour artwork and tape labels, plus an insert.

The Golden Gonk – “Kitsch Wing” (Shack in the Barley Productions, shitbar112) – £3.00 (not including shipping)

As the not-quite-cellar-dweller at some heinous Black Metal wedding, my lupine hide ducked and weaved through the distended revellers, my mind flashed brightly and somewhat prematurely- high red walls and the like…I mean, what a TERRIBLE time to go- night was not yet over…throned and alone I glimpsed that outer sanctum- the shade of earth and colour of sky, where pylons penetrate and where ragged yelps resound…we’d all like to slither somewhere like that some day- don’t forget to pack the pellets!!

White C50 cassette in a clear case with full colour artwork and tape labels, plus an insert.

“Wet dog” she cried, but we both knew the truth- ‘twixt mould and fur, somewhere beyond the breakfast dishes, caged in half-light…half-forgotten if I’m being honest…this was the third strike, then home to tar and feathers…and to think we didn’t even get the subtitles off…

“Fusty Ferret” is a companion piece to the “Creature Booze” (released in June) and “Kitsch Wing” cassettes.

Download the zip file here (contains both the music and full artwork): 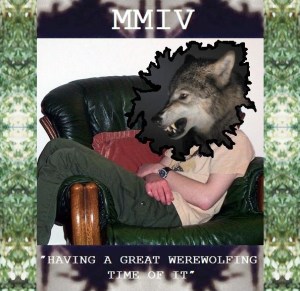 MMIV – “Having a Great Werewolfing Time of It” (Shack in the Barley Productions, shitbar114)

At the funeral of summer I cantered with gift horses, rolled in their golden droppings ‘tween open fields and stables…I lazed on the harbour, pleasure cruisers docked and bobbing- “if one conks out we can hop to the other”…there were no sharks in those waters, just plenty of mosquitoes…there was no option other than to dive right in…or so we thought- no one read the next chapter…the viable did a vanishing act, jugglers became tumblers- of course lightweight and arbitrary stood next to what came “later”, but heavy enough for pampered princes…angered from all angles, lost in the cold, tricked and pricked- yes, the “age” was truly over, save for those sequestered in bunkers…onward to sumptuous stagnation…

Download the zip file here (contains both the music and full artwork):

Swamp Circle recently released the second volume of the nicely cosy “Minimalism & Juxtaposition” compilation, in which the artists’ contributions are layered on top of each other in various combinations to deeply wondrous effect. I sent forth some shit in my Scrapie Flock guise, as did the lovely duo Salad With Ganesh…promise me you’ll play the whole thing though- it’s all good!! 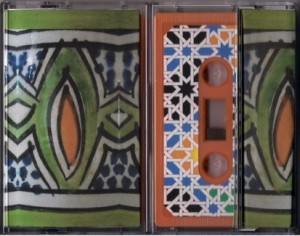 This C40 split tape by Salad With Ganesh and the equally excellent Unlikely Dreamfellows came out a few weeks back on the brand new Dubbing More Fucking Rubbish Tapes imprint. UD kick off proceedings with a gorgeous track of somnambulant driftiness entitled “Frolicking with Davy and Elle”, while SWG’s heavy-ass side-long effort features the snappy title “Faking Death in Order to Troll Your Own Online Memorial Site”- awesome!!

This tape is sold out at source, but I have a couple of copies available in my Discogs Store (along with other Dubbing More Fucking Rubbish Tapes releases)- see the top of this post for the link.

So that’s it for another killer year- thanks to all the artists involved in the stuff released by Shack in the Barley Productions in 2014 and to all the people who bought and downloaded it!!

There’s loads planned for 2015, so keep your eyes peeled!! See you next year…

This entry was posted in Uncategorized. Bookmark the permalink.